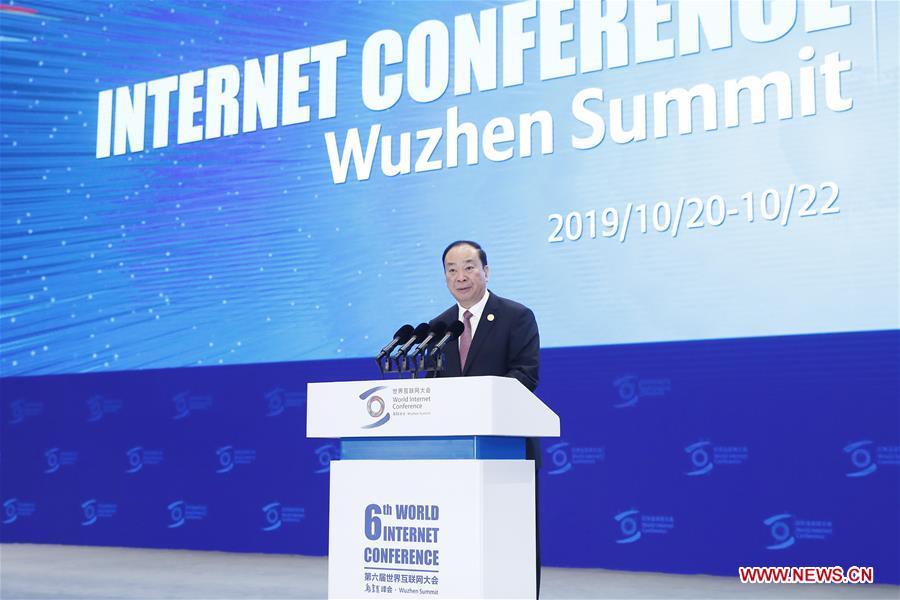 Huang Kunming, a member of the Political Bureau of the Communist Party of China (CPC) Central Committee and head of the Publicity Department of the CPC Central Committee, attends the opening ceremony of the sixth World Internet Conference in Wuzhen, east China's Zhejiang Province, Oct. 20, 2019. Before delivering his speech, Huang read Chinese President Xi Jinping's congratulatory letter to the conference. (Xinhua photo/Liu Bin)

With the theme of "Intelligent Interconnection for Openness and Cooperation -- Building a Community with a Shared Future in Cyberspace," the three-day conference will bring together more than 1,500 participants from over 80 countries and regions, including members of the Internet Hall of Fame, Nobel Prize winners and Turing Award winners.

Executives from major tech companies from home and abroad such as Microsoft, Qualcomm, Alibaba Group and Huawei will share their insight on the future development of the internet at 20 sub-forums, covering popular and cutting-edge topics such as artificial intelligence (AI), 5G and industrial digitization.

Huang Kunming, a member of the Political Bureau of the Communist Party of China (CPC) Central Committee and head of the Publicity Department of the CPC Central Committee, delivered a keynote speech at the opening ceremony of the conference.

Fifty years after the birth of the internet, efforts should be made to seize new opportunities and address risks and challenges to build cyberspace into a shared community that benefits all humanity, Huang said.

The senior official also called for enhanced efforts to develop the digital economy, unleash the digital dividend, and protect the security and order of cyberspace.

The reports will review global internet development over the past five decades and the history of Chinese internet during the last 25 years.

The number of internet users in China hit 854 million in June 2019, with the internet availability rate reaching 61.2 percent, according to the China Internet Network Information Center.